Herbert Heap was born in Edgworth in 1898, his parents were John and Sarah Jane; he was an only child. The 1901 census shows him living with his family at 79 Bury Road. His father worked in the cotton industry as a loom jacket. They were non-conformists. In 1911 they were still living at the same address and Herbert, now 13, was working as a sorter in the Calico Print Works. His Father was a General Labourer working for the Urban District Council.  He was the cousin of James and Albert Entwistle (see separate biography). 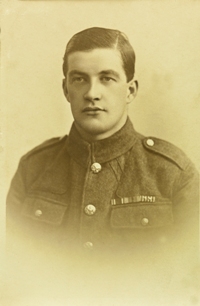