Thomas Wilson was born in Halliwell, Bolton in 1874, the son of James Wilson and Rachel Taylor. Rachel Taylor was born in 1846 and it seems that she had an illegitimate daughter May E Taylor in 1865 before marrying James Wilson in Halliwell in 1873. James Wilson died in 1877 aged 32 and Thomas’ mother then married William Deakin in 1880 (although the marriage is listed as being between Rachel Taylor and William Deakin). In 1881 the Deakins were living at 3 Back High Street, Chapeltown, Turton with May and Thomas and a newly born daughter, Isabella Deakin. Father William Deakin is listed as a Cotton Spinner. In 1891, Thomas is working as a ‘Cotton Scutcher’ and mother Rachel is a ‘Hosiery Laundress’. William Deakin died in 1897 and Rachel, Thomas’ mother, died in 1898. The 1901 and 1911 Thomas was still a scutcher and was living as a boarder with a Henry and Elizabeth Deakin at 85 Wellington Road, Turton.1,3,5 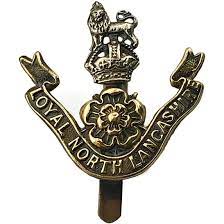